I always attribute losing friends to growing up. I guess it’s because as we grow so tremendously as a person, we outgrow the life we once lived. I hate saying “losing” friends because it sounds like someone died or left when really, you’re just not in each other’s lives anymore.

I would never say that losing friends is easy because it’s not. It’s especially not easy for me because I get so emotionally invested in people that it is so hard to let go. My incredibly optimistic self wants to hold on to hope that maybe in the future, we could resume our friendship. It’s hard to accept but after talking about it extensively, I now know that I would, above all, never want to hinder someone else’s personal growth because they were holding on to a friendship. I would never want someone that I care so much about to limit their growth and potential as a person because they were trying to stay in a friendship that they had long since outgrown.

One of the most beautiful parts to a friendship is your shared inside jokes, secrets, and moments of just being yourself around someone that you feel the most comfortable with. Looking back on friendships, it’s these things, the foundation of your relationship, that you miss most. It’s not the places you went together, or the things you could give one another, but the feeling you had when you were together.

That is what makes it so hard to let go. When you think of this person, you don’t think of the arguments you had or the disagreements you challenged. You think of moments spent laughing until you cry. You think of nights spent talking for hours about everything that was on your mind. You think of a time where you did something crazy and didn’t get caught.

Inside jokes: can we just take a moment? Nothing in the entire world is funnier than an inside joke. There’s so much history attached to it. It was a funny joke to make at the time but when it is brought up later, it’s even funnier. And it makes no sense to outside people which makes you feel even more connected to your best friend. It’s like speaking another language. 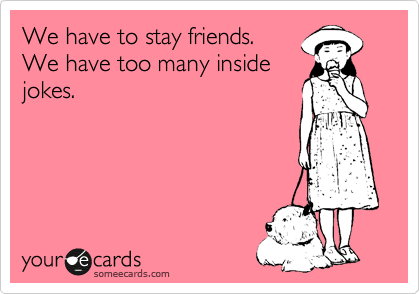 My best friend and I had a longtime inside joke that involved a third person, an adult that we both knew. I happened to run across this person in passing a few days ago and it tugged at my heart and effected me more than I thought it would. I was immediately drawn to text my old friend and tell her that I saw him and mention the inside joke. Seconds later, I decided against it because it would’ve been so random and out of the blue. That is when I realized that all of our inside jokes were dead. What is an inside joke if you can’t share it with the one other person who would get it?

This got my brain thinking about all of the other inside jokes we had that now became just an inside joke with myself.

It’s hard when something that used to bring you literal tears of laughter, now makes you feel a little sad. For me, it’s the little things that bring me back to a moment of true connection with old friends.

(moment of silence for all the jokes that no longer exist)

This friend and I had hundreds, maybe thousands, of inside jokes. I could never possibly remember all of them. It’s so crazy how just seeing this random person I don’t even know very well, could bring back so many moments of shared laughter between us. It made me miss her and our friendship.

Inside jokes hurt because they come back to you so unexpectedly that, at least for me, a wall of emotion hits. They bring you right back to the moments you were in when these ideas could brighten your day. They were always there to lighten the mood and now their use goes silent. So many memories of this person come flooding in so quickly all because of the small jokes they’re attached to. They hurt because they embody your friendship and some of the best parts of it where you were laughing and bonding as friends. They’re lighthearted in nature and remembering them delivers flashbacks of the absolute best moments of your friendship.

They hurt because, in a way, they no longer exist.

Inside jokes solidify the idea that you and your best friend were a team. There was always more than just laughter there. There was connection. There was understanding. There was a sense of belonging. I think this is why they hurt more than any other type of memory.

And above all, they will always make me smile.

that   we can’t expect to grow so tremendously ourselves and not grow apart from the lives we once lived.

One thought on “The Inside Jokes Hit Different”

pretending to be a photographer

Processed with VSCO with a5 preset

Processed with VSCO with c9 preset